Owned by General Motors, Pontiac was established in 1925. Although the brand was initially known for its sedans, it quickly gained a reputation for making muscle cars in the 1960s, during the peak of the muscle cars’ popularity. As the makers of such classics as the Firebird, the Trans Am, and of course, the epitome of desirable American muscle – the GTO, Pontiac remained at the front lines of development for muscle cars right into the 1970s.

Since its debut for the 1964 model year, the GTO has been one of the most popular and collectible cars on the market and has been featured in many popular television shows and movies including Gone in 60 Seconds, Kojak, other The Big Steal.

One of the most collectible years is that first year — 1964. The one-year-only styling for the front gives it some uniqueness, while plenty of options ensured it lived up to its performance image. Among the options was the ability to upgrade the engine from the standard 4-barrel version to a more powerful and throaty “Tri-Power” version. Checking off that option would swap out the 389 cubic-inch V8’s single four-barrel carburetor for an exotic triple two-barrel carburetor setup.

Let’s take a closer look at the 1964 Pontiac GTO Tri-Power and what makes it so unique!

RELATED: It Sure Is Different: Pontiac Trans Am Pickup Truck

History & Specifications Of The 1964 Pontiac Tri-Power

The 1964 Pontiac GTO (Gran Turismo Omologato) is an undeniably special ride for a host of reasons. The GTO was largely considered the first muscle car and is affectionately known as “The Great One,” and is an iconic classic. The Tri-Power iteration takes the character of the GTO a step further. The Tri-Power option costs around $100.

Although GM produced 32,450 1964 GTOs, only around 8,200 of them were sold with the Tri-Power engine, making it a collector’s dream, especially when found in a mostly (or entirely) original car in good condition. With Pontiac existing no longer, the classic GTO has become, if anything, even more desirable and collectible.

Although the base engine 1964 GTO was powerful in its own right, the Tri-Power option took it up a notch. The ’64 GTO came standard with a 389ci 4-barrel V8 that made 325 horsepower; the Tri-Power version made 348 horsepower and could accelerate the GTO to 60 mph in less than six seconds. It was notable that at that time the GTO’s engine was larger than what GM normally allowed in their midsize models. But the GTO was able to pass through a loophole because it was a trim level, rather than a model. They were sold with either two-speed automatic or four-speed Muncie manual transmissions.

The name “Tri-Power” was derived from the unique carburetor set up that consisted of three two-barrel, Rochester 2G carburetors inline on the intake manifold. With Tri-Power, the GTO could blast down a quarter mile track in just 14.8 seconds.

The center of the three carburetors operated normally, while the outer secondary carburetors were used to provide more air/fuel on demand, thus increasing power. The Tri-Power option was available on the GTO from 1964 through 1966. For 1967, the GTO’s engine was increased to 400 cubic-inches and there was an optional “HO” version that still used a four-barrel carburetor. That essentially ensured that the Tri-Power GTOs had a special place in muscle car history.

Other Features Of The 1964 Pontiac Tri-Power 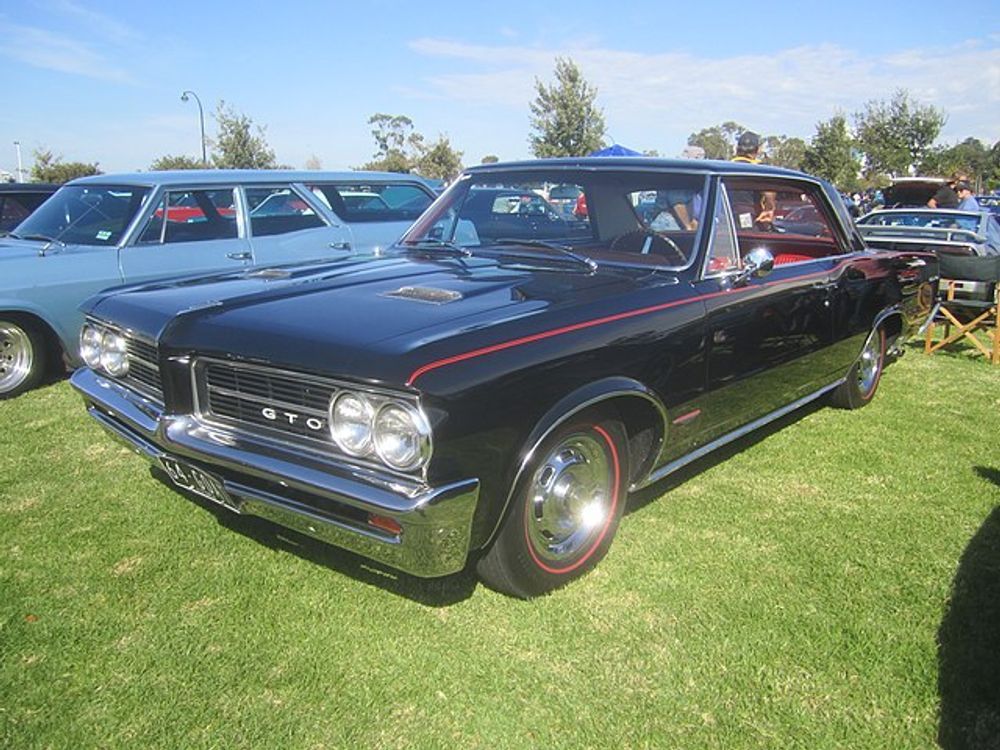 The collectability of a 1964 GTO with Tri-Power is as undeniable as its power and beauty. However, the reasons to love this car go beyond the high-powered engine and prestige that comes along with owning one to show off at classic car meets.

With the optional Tri-Power, customers were also offered the option to add metallic brake linings. These were more effective brakes that provided shorter braking distances and more resistance to fade. Additionally, the metal lined brakes were able to cool down more quickly and also required less pedal pressure from the driver.

Furthermore, as with the standard engine, customers could also opt for a limited slip differential with the Tri-Power package. This option allowed the car to shift torque between the left and right rear wheels, allowing more power to be put down whether accelerating out of a turn or taking off down a drag strip.

All told, the GTO’s first year was certainly a “Great One”, made all the better with the street-scorching option of Tri-Power.

Nikia Hunt inherited her love of cars from her dad as she grew up watching him work in his garage on everything from classics to diesel trucks. Currently a huge fan of American muscle and off-road-ready vehicles and with an acute interest in the future in EVs, Nikia splits her time between writing for HotCars and teaching high school language arts. Nikia has many contributive works in several creative writing publications and holds a Master’s degree in English with emphasis in Creative Writing from the University of Nebraska at Kearney.