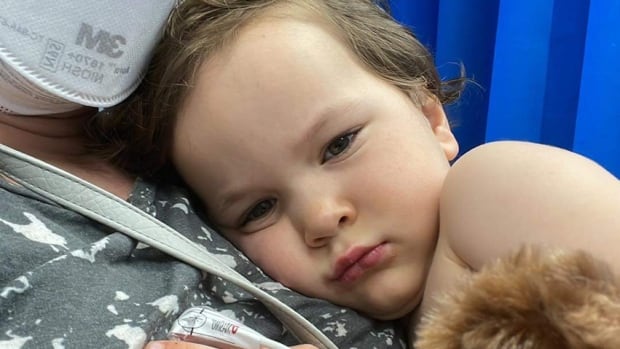 A Bathurst mother wants people to know the risk of COVID-19 for children is real after one of her three infected young boys was recently rushed to the hospital, convulsing, unconscious and blue from a fever-induced.

Kayla Guitar realizes what happened to four-year-old Luca is not the norm, but says it’s “frustrating” to hear people talk about COVID as “just a little cold.”

“Even if it’s fine for some people, it’s not fine for everyone.”

She thought her son was dying.

It was traumatic for the entire family, said Guitar, and she hopes to raise awareness about the seizures he suffered to hopefully spare others some of the terror.

It all started the evening of April 8, when Luca woke up with a fever. Guitar gave him ibuprofen, but by the next morning his temperature started to rise again and he was “acting a little bit weird.”

His arms just shot up and got really tense, and he started making weird noises. So I screamed out to my husband.– Kayla Guitar, mother

His brother Louis, 6, who is vaccinated against COVID-19 but tested positive for the virus the morning of April 7, had also had a fever and general malaise.

And Luca’s twin Léo seemed sicker than both of them.

Guitar had settled all three of them in front of the TV, when Luca suddenly started convulsing.

“His arms just shot up and got really tense, and he started making weird noises. So I screamed out to my husband, who was upstairs, to quickly come down.”

Luca’s “little lips were blue. And the rest of him started going blue as well, and he was completely unconscious.”

She laid him on a bed and her husband, who works in health care, was about to start cardiopulmonary resuscitation when he realized Luca was breathing again.

An ambulance arrived within about 15 minutes. The paramedics tested Luca for COVID and he was positive.

Likely caught it from older brother

Guitar suspects he caught it from his older brother, who attends Grade 1 at a school where there has been cases.

“Me and the twins, we’ve been staying in, pretty much. And my husband works, but [wears] an N95” mask and rapid tests every day, she said.

“We’ve been still fairly cautious, I would say compared to most” people, largely because the twins are still too young to be vaccinated.

About an hour after they got to the hospital, Luca’s condition improved. He started singing songs and listing his favorite dinosaurs.

But after a short nap, he stopped answering Guitar, his oxygen level and heart rate “dropped significantly.”

That’s when he had another seizure. Guitar watched, helpless.

The second one was less scary though because the doctors had explained it was a febrile seizure.

According to the Canadian Pediatric Society, febrile seizures are caused by fever, last only a few minutes and have no long-term effects. They occur in two to five per cent of children between the ages of six months and five years, it says.

“It’s a convulsion because of the fever and everything contracts and they stop breathing for a bit,” said Guitar. “It’s not just with COVID, with any illness that can cause a sudden increase in fever.”

Luca’s temperature was “39 ​​point something,” she said. A normal temperature in children is about 36.6C.

“If parents can know that febrile convulsions are a risk for kids with COVID, then if it happens to their kids, they’ll know what it is and they won’t think that their kid is dying in their arms,” Guitar said.

The hospital kept Luca overnight for observation, but he was discharged around 11 am

It took about another four days for him to shake the fever, said Guitar. “He’s doing good now.”

His twin is still coughing, and his older brother has recovered. Guitar and her husband, who also tested positive, both have a lingering cough and low energy.

“It’s unfortunate that we’ve let go of all the [COVID-19] restrictions,” before children under five can get vaccinated, she said.

“People talking about how restrictions cause anxiety. … But like for us, seeing Luca get so sick caused us way more anxiety than anything else we have lived through during the pandemic.”

36 children hospitalized since October, 2 in ICU

A total of 36 children with COVID-19 have been hospitalized in New Brunswick since October 2021, including two who required intensive care, according to the Department of Health.

Twenty-six of them were under age 10, while the other 10 were aged 10 to 19, the COVIDWATCH web page shows.

Four children under 10 were hospitalized for COVID-19 between April 10 and April 16, the latest update shows.

“For the most part, we are not seeing critical illness in most pediatric patients,” said Dr. Alana Newman, a neonatologist at the Saint John Regional Hospital who participates in the general pediatrics call group.

“However, there certainly are many patients presenting to emergency departments and sometimes needing hospitalization for COVID infections.”

The symptoms and severity are “hugely variable,” she said.

In older children who are vaccinated, “a lot of it is kind of like head cold-type symptoms,” such as a sore throat, cough, or nasal congestion.

In the under-five age group, there are “a lot of children with high fevers.” These “can cause things like febrile seizures, which are not in themselves actually dangerous in the long term … [but] are certainly terrifying and traumatic for the family,” said Newman.

There have also been children who require intravenous rehydration after vomiting or diarrhea, she said.

For every child being treated in hospital, there are likely “many others” who are sick but being managed at home, Newman added.

93% of hospital cases unvaccinated or under-vaccinated

About 93 per cent of pediatric COVID-19 cases since Dec. 5, 2021, were unvaccinated or “under-vaccinated” at the time of hospitalization, said Department of Health spokesperson Bruce Macfarlane.

Vaccination status by age group is no longer provided by the department.

But as of March 29, 39 per cent of children aged five to 11 had received two doses and 59.2 per cent had received one dose, the COVID-19 dashboard shows.