Amazing come back to Judo

Aaron Hawkins achieves his dream of gaining the coveted grade of 1st Dan despite sustaining a life changing injury. Aaron’s self-determination, positive attitude and general zest for life is an example to others. Club members, young and old are all inspired by his enthusiasm and dedication to training. On many occasions, those watching Aaron practice and compete have no idea that he wears a prosthetic leg – this comes as a surprise to some who have trained with him too!

Aaron started his judo journey when he was 8 years old, joining Ipswich Judo Club. Training throughout his teens and eventually being promoted to 1st kyu in 2011. This is where Aaron started on his Dan grade quest, however this was also when he had the accident that resulted in the amputation of his lower right leg. Following the accident Ipswich Judo Club members saw an incredibly resilient young man – we can only imagine what he went through psychologically. Through dark times and unable to take part in Judo for a short period, Aaron was able to try and return to the Judo mat with a prosthetic leg after a period of physical and mental recovery. However, Aaron’s leg was less than ideal for Judo and took a great deal of gaffer tape and foam pipe insulation to make his prosthetic anywhere near safe to use on the Judo mat. It took Aaron a while to re-acquaint himself with Judo, but not long to realize that he required a more bespoke Judo leg – one that didn’t keep falling off or need to be held together with gaffer tape!

It’s been 10 years since Aaron’s accident and “something that completely changed his life”! He’s decided it’s an event that needs to be remembered! Aaron says: “sport. family and friends have helped me massively to keep me positive and realize life is worth living”, “I like to think I push myself to the limit to prove to myself I can succeed”. So, since it’s 10 years this year Aaron decided he’d “do something crazy”! Now, you don’t get much crazier than throwing yourself out of a perfectly serviceable aircraft at 10,000ft with a handkerchief, sorry parachute, strapped to your back!! To cap it off Aaron’s scared of heights too, so a Skydive in 2022 seemed the obvious thing to do.

Aaron’s doing it to help raise funds for a great cause, a charity called “Limb Power”. The charity uses sport, exercise and activities to aid the rehabilitation of amputees. Something Aaron knows helped his mental stability and keeps a focus on enjoying life. Aaron is taking part in a charity skydive to raise much needed funds to give other amputees the help and support that he benefitted from. 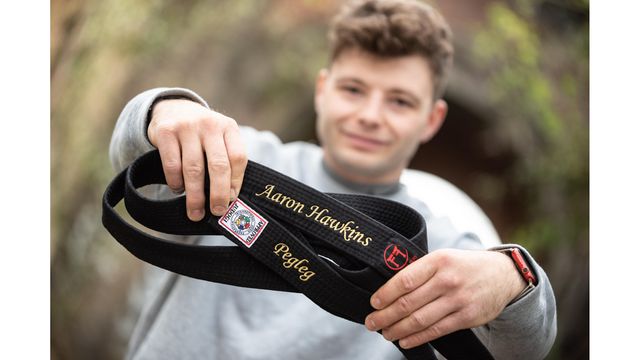 Determined to gain his black belt competitively, this presented Aaron with his first hurdle. The rules in Judo preclude wearing hard, metallic objects in competition. Getting these rules changed would require setting a precedent and one that would need to be done at National and International level – something that would take a very long time. Discussions began with the BJA and the Eastern Area Director of Examiners highlighting that Dan Gradings was an assessment of a Judoka and not competition, therefore, with caveats, Aaron could take part. His prosthetic leg had to be of a similar texture to a normal leg and all players would be informed that the Judoka was wearing a prosthetic.

Aaron went straight back to the prosthetic clinic and got them to design a leg that was based on carbon fiber and covered with protective foam. His new prosthetic leg was softer than the real thing so there was no chance that anyone would get injured by it.

Training stepped up a gear after Aaron collected his new Judo leg. Aaron felt confident and ready to compete again with his new prosthetic, so Aaron entered the Eastern Area competitive Dan grading at Thetford in October 2016. Aaron won two out of five contests, coming home with 20 points towards his 1st Dan.

Due to work commitments Aaron left Ipswich Judo Club and re-located to Gloucester from Ipswich. He continued to train in Gloucester, but Aaron’s main focus was on his career development. Successfully completing his apprenticeship, Aaron returned to Ipswich and resumed his quest for his Dan grade once again. Complete his journey Aaron made a few alterations to his Judo prosthetic leg making it more comfortable for him. However, Aaron’s training had to come to halt due to the Covid-19 lockdowns. Training soon started back up with the easing of Covid lockdown restrictions, and in September 2021 Aaron went to the Dartford Dan grading, having to make a case for his attendance as the Southern Area had not come across the situation of Judoka using a prosthetic leg at a Dan grading.

It turned out to be a frustrating day for Aaron at the Dartford Dan grading; Aaron lost his first fight by Ippon to a throw that was just about technically perfect! Getting caught by one of those there’s not much you can do! Aaron then picked up a shoulder injury during his second contest and had to withdraw – that ended his day. A positive from the day, for Aaron, was a letter from the Southern Area Director of Examiners, Derek Paxton; he examined Aaron’s Judo leg and deemed it safe to use in Judo gradings. Aaron now had validation that his prosthetic was acceptable for use in gradings, avoiding any issues of participation in different BJA areas in the future.

With a few months in rehab, March 2022 saw Aaron ready to go again at Bedford Dan grading. With a much better day with 3 Ippon wins and gaining 30 points, Aaron now had a total of 87 points towards the grade – Aaron was already planning to go to the High Wycombe grading on 16th April 2022. Other players train week in and week out in their home Dojo’s perfecting their skills, Aaron did the same. However, Aaron was unaware that High Wycombe Judo Center has a sprung floor and that it was so different to the other mats that he has practiced and fought on previously. As a result, taking Aaron time to get used to with his footwork and balance. Aaron lost his first contest by being thrown for Ippon with a very good Uchi Mata. Aaron went on to win a further two contests by Ippon, with one only lasting 11 seconds! Resulting in Aaron being quite pleased with the outcome!

Aaron’s coach from Ipswich Judo Club, Kevin Charlton, is humbled to have someone like Aaron as a member of Ipswich Judo Club. Aaron’s dedication and determination is incredible, he is a role model to all our members including the parents. Aaron’s “never give in”, “don’t underestimate yourself” and belief that “anything is possible if you put your mind to it” attitude is inspirational. Aaron’s absolute refusal to let his injury hold him back shows his incredible mental strength. For Kevin, it is a pleasure to be his coach ,he could not be happier or more proud to have Aaron as a member of Ipswich Judo Club.