Real estate developer Charlie, 28, who entered the villa this year as a bombshell, insists Jacques, 23, and Antigoni, 26, are ‘securely in the friend zone’.

Charlie spoke out after eagle-eyed fans spotted former rugby player Jacques and singer Antigoni together in a plethora of social media snaps after Jacques deleted pictures of his ex Paige Thorne, who is still in the villa.

‘Everyone keeps on asking this at the moment. Similar to myself and Antigoni, we’re securely in the friend zone.’

Jacques sparked romance rumours with Antigoni after they were spotted on a string of nights out together. 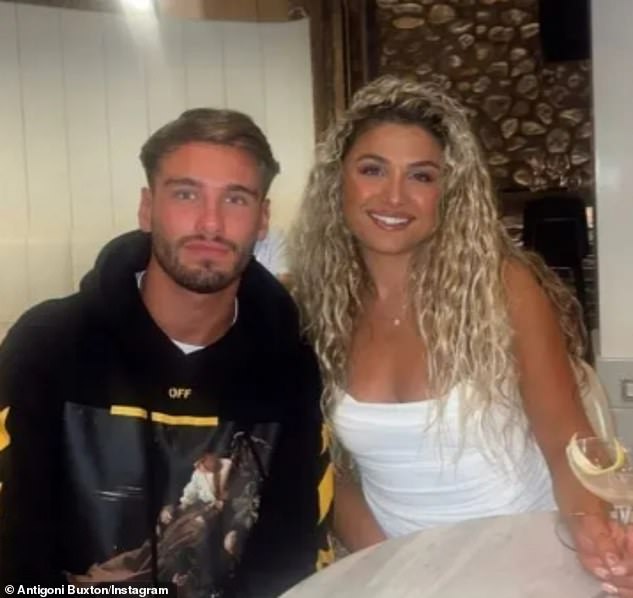 Denied: Real estate developer Charlie, 28, who entered the villa this year as a bombshell, insists Jacques, 23, and Antigoni, 26, are ‘securely in the friend zone’

The sportsman quit the villa earlier this month over fears he’d lose control after bombshell Adam Collard entered the villa – who has since coupled up with his ex-Paige Throne.

Eagle-eyed viewers noticed this week how Jaques deleted all traces of paramedic Paige from his Instagram page.

On Wednesday night, Antigoni and Jaques were seen enjoying a night out in Manchester hotspot Peter Street Kitchen with ex Islander Lucinda Strafford. 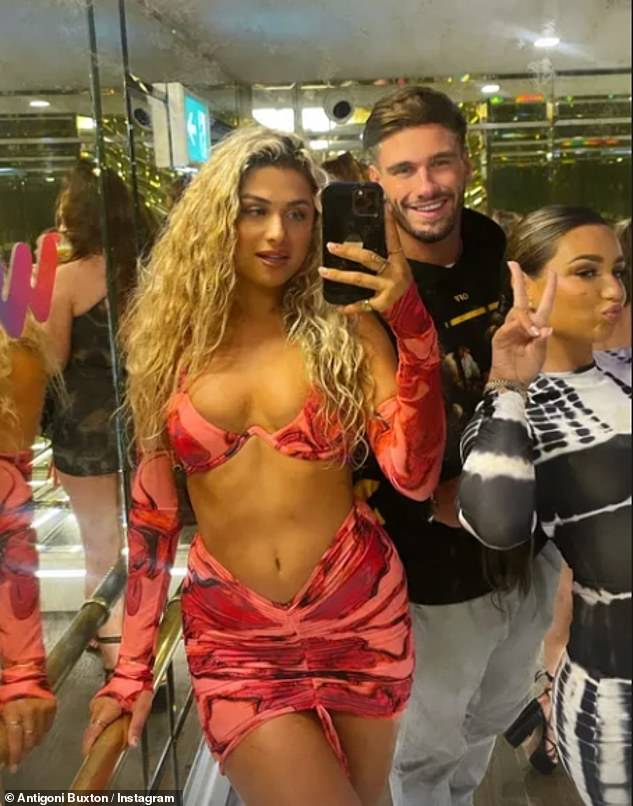 Out out: On Wednesday night, Antigoni and Jaques were seen enjoying a night out in Manchester hot spot Peter Street Kitchen with ex Islander Lucinda Strafford

Earlier this month Antigoni and her famous mother Tonia were also seen dining with Jacques and his mother Janet.

Taking to Twitter one person pointed out: ‘Anyone else noticed Jacques all of his Insta posts with Paige?’

A second wrote: ‘Oh s**t Jacques really just deleted all the pics he had with Paige. Guess he ain’t picking her up.’ 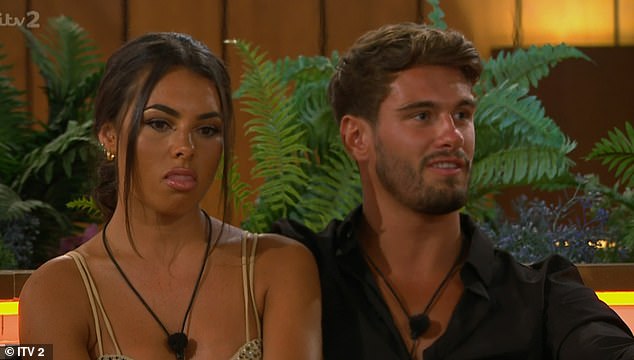 All over: Eagle-eyed viewers noticed how Jacques had deleted all traces of paramedic Paige, who is still in the villa, from his Instagram page

Another wrote: ‘Antigoni and Jacques are literally inseparable outside the villa, I am actually here for them, he’s deleted most of the love island pics off his IG so he’s not waiting for Paige #loveisland.’

While one eager fan posted: ‘Obsessed with the idea of ​​Jacques and Antigoni #LoveIsland.’

Another suggested: ‘Could Jacques and Antigoni become an item. This makes me even more buzzing for reunion bring it on I wanna see something. #loveisland.’ 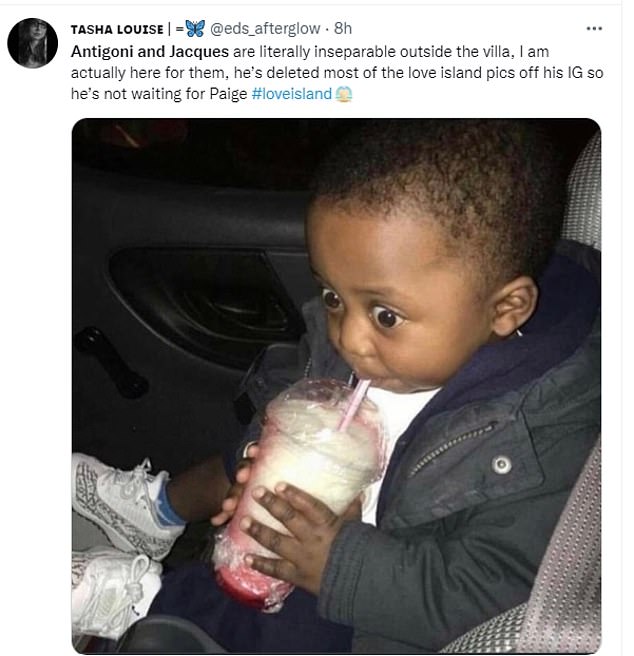 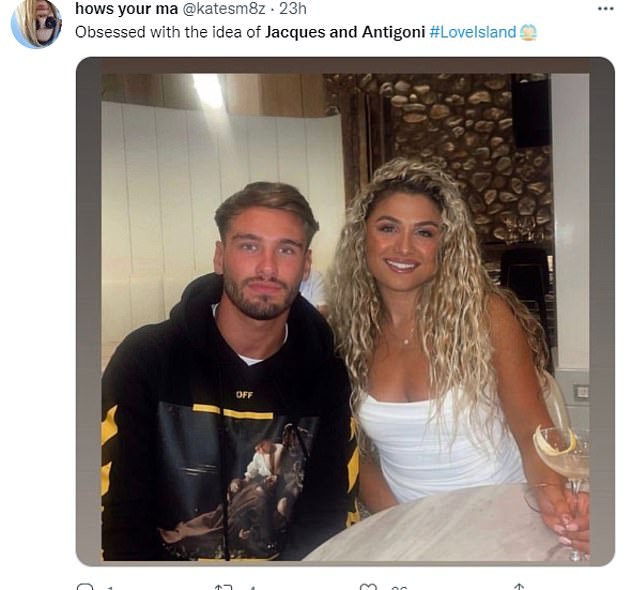 Shipping them: Love Island fans took to Twitter to express their thoughts about Antigoni and Jacques’ ‘friendship’ after seeing pictures of them together

Last weekend, Jacques thanked fans for their support as he shared a picture of himself while out for dinner with his mother after he quit Love Island earlier this month.

He removed himself from the show after former Love Island star Adam Collard entered and flirted with his then-partner Paige.

Jacques said producers tried to persuade him to stay but he left to look after his own wellbeing. 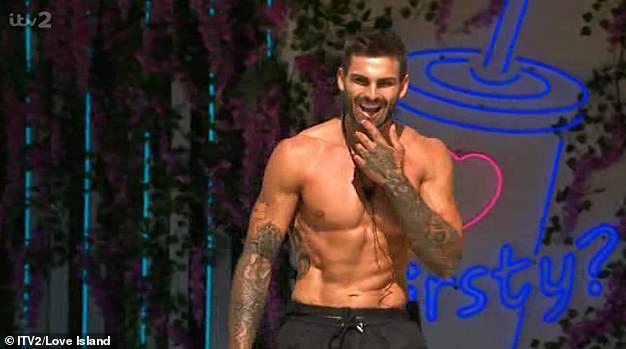 Mixing things up: Jacques was rattled by the arrival of former contestant Adam Collard, who set his sights on the rugby player’s partner Paige 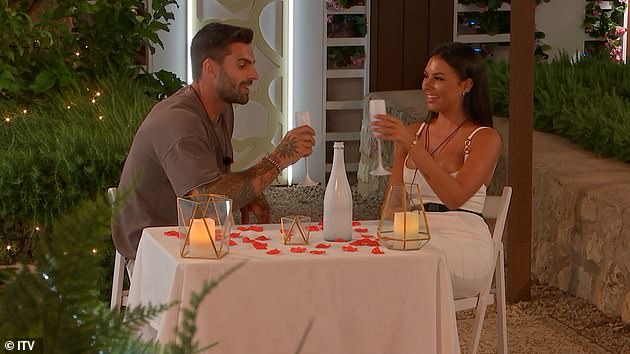 Unimpressed: Jacques said he’d reached breaking point after Adam’s arrival, telling The Sun : ‘I thought if I don’t get myself out things could go horribly wrong and I could get physical’ (Adam pictured on date with Paige after Jacques’ departure)

Sharing a picture of himself with his arm around his mother on his Instagram page, he wrote: ‘Back to the standard Saturday taking R jan (sic) out for tea.’

He wrote: ‘I just want you all to know that I’m in such a better place mentally.

‘A huge reason for that is because of all the love and support I have received!

‘I’d be in a much darker place if it wasn’t for all of your kinds words, so thank you again I appreciate it so much.’ 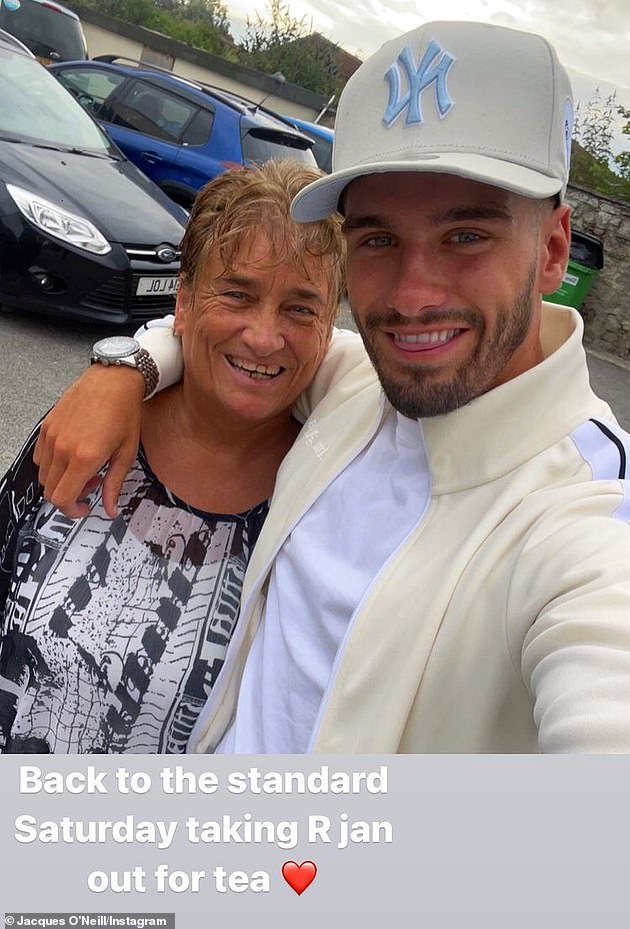 Back to normality: Jacques was in good spirits as he took his mother Janet out for dinner last Saturday after he left the villa