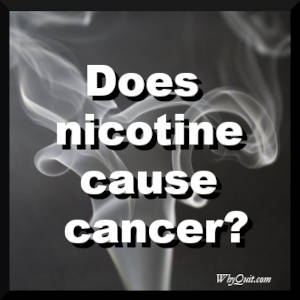 While Google’s search engine generally reassures nicotine users that it won’t increase their likelihood of developing or dying from cancer, a rash of 2022 studies suggest otherwise.

Before getting started, first, in cancer biology, there are legitimate distinctions between “causing” cancer, “promoting” cancer, and the chemical “itself,” or the chemicals it breaks down into (its metabolites) causing cancer.

But if one is advocating the “relative safety” of inhaling a potent natural insecticideis it fair to hide known cancer risks behind a semantics curtain?

As yet, is there any evidence that e-cigarettes cause cancer? It’s early and epidemiological evidence is extremely limited. Also, stay mindful of the fact that the amount and duration of nicotine exposure are likely to be important risk factors.

“Cancer Prevalence in E-Cigarette Users: A Retrospective Cross-Sectional NHANES Study” is the title of a 2022 study published in the World Journal of Oncology. It found that “e-cigarette users have 2.2 times higher risk of having cancer compared to non-smokers.”

While the vast majority who annually succeed in fully arresting their chemical dependence upon nicotine do so cold turkeysince 1984, pharmaceutical industry NRT makers (nicotine replacement therapy) have been a primary smoking cessation study funding source.

Most key researchers have a history of having been paid consulting, speakers or study fees by NRT manufacturers. Unwilling to bite the hand that feeds them, few have studied and shared real-world nicotine acessation research as doing so would highlight NRT’s failure.

To quote Professor Simon Chapman’s new book “Quit Smoking Weapons of Mass Distraction,” “there can be few if any other drugs, used for any purpose, which have even come close to the dismal success rate of e-cigarettes or NRT in achieving their main outcome.”

“If we went along to a doctor for a health problem and were told, ‘Here, take this. It has a 90% failure rate. But let’s both agree to call this successful,’ we would understandably take the view that ‘success’ when used in this context was not the way that it is used in any other treatment context.”

As for Chapman’s view of vaping risks, “If any scientist had declared in 1920 that cigarette smoking was all but harmless, as vaping advocates insisted today about e-cigarettes, history would have judged their call as heroically and dangerously incorrect. cavalier call that many vaping advocates routinely make, after just 10 years or so of widespread use in some nations.”

Is long-term nicotine use elevating your risk of dying from cancer? Why wait on bad news and low odds, while wishing you’d stopped vaping or chewing nicotine gum years earlier.

There was always only one rule, the Law of Addiction. When quitting, while one puff will always be too many and thousands not enough, it’s impossible to fail so long as all nicotine stays on the outside.

Yes, only one rule … just one hour, challenge and day at a time, to never take another puff, dip, vape or chew!

Knowledge is a Quitting Method