The new 2023 Cadillac Escalade-V seems like a sledgehammer that has no interest in anything but excess, from size to power. Aside from its rip-roaring 682-horsepower V8, Cadillac’s most powerful production engine to date, it’s getting a bespoke suspension, big brakes, and an interior that’s dripping with luxurious features, including a 36-speaker audio system.

The three-row SUV will be offered in both standard mm) and ESV ( mm) long-wheelbase versions, with prices starting from $149,990, making it the most expensive series production Cadillac. To put that MSRP into perspective, it’s nearly 50 percent more than the new (but slower) 523-hp 2023 BMW X7 M60i while approaching Mercedes-Maybach GLS pricing territory ($160,500).

Cadillac itself calls the Escalade V the ‘industry’s most powerful full-size SUV’ full stop. Part of the reason it can do that is that the Dodge Durango Hellcat is now out of production but let’s not take too much away from what seems to be a very sincere attempt to meet customer demand and uphold the standard that V-badged cars have set thus far. Here’s a deeper dive into everything that buyers of the most powerful full-size SUVs in General Motors’ arsenal will get.

A Drivetrain Any Gearhead Can Love

Under the hood of the Cadillac Escalade-V is a hand-built supercharged 6.2-liter V8 engine that sends power to all four wheels via a 10-speed automatic transmission.

Cadillac says that not only is the transmission specifically tuned for the sporting nature of the Escalade-V but also that the torque split is model-specific as well. Under normal driving circumstances, the big SUV will split power equally between the front and rear axles for maximum traction.

When called for, the Escalade can send as much as 67 percent of the power to the rear axle, which makes sense for a vehicle that will shift quite a bit of weight towards the rear under hard acceleration. Cadillac wouldn’t specify exactly how or when the SUV would make that swap though.

Hardware To Back Up The Power 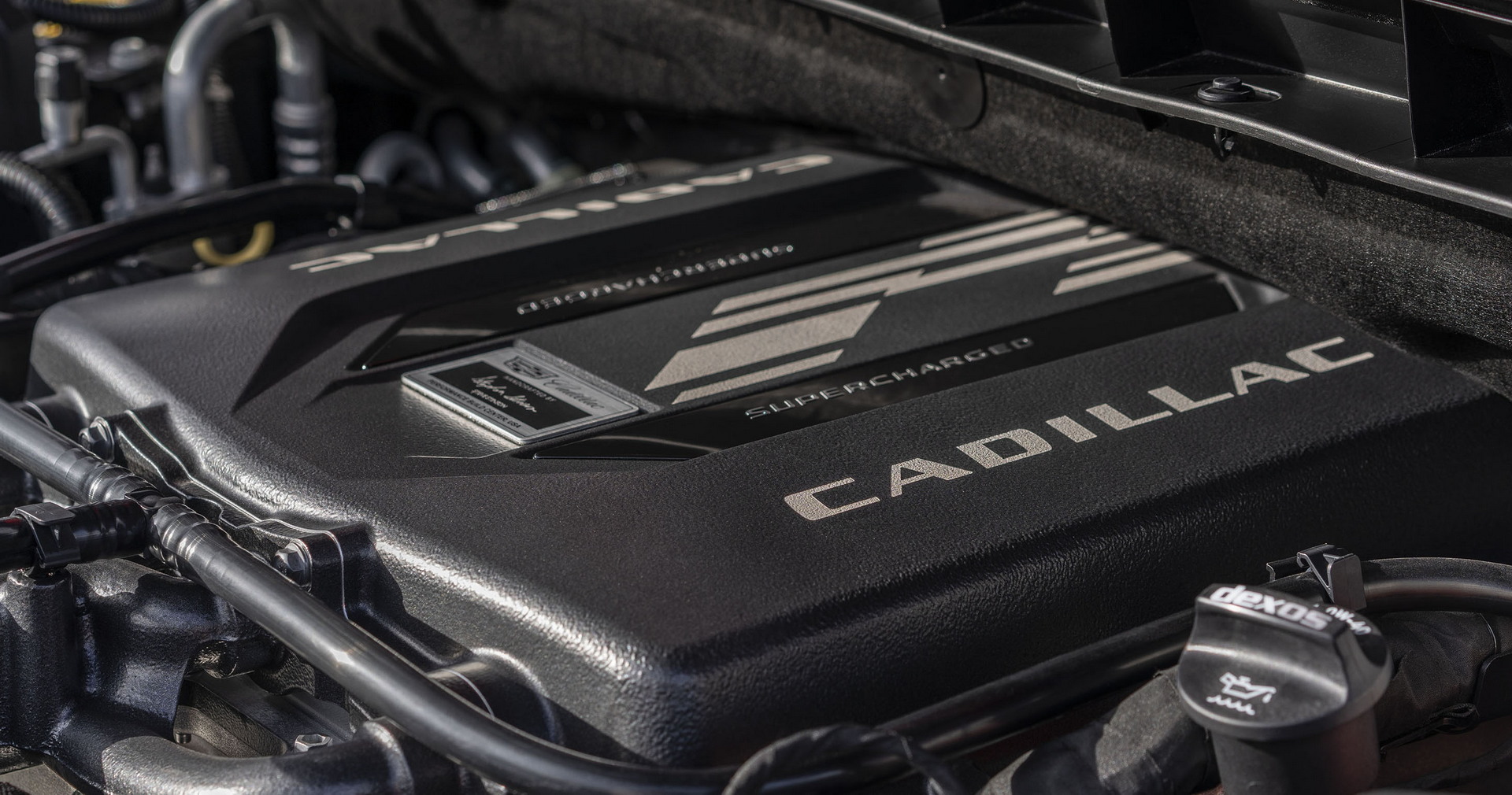 Cadillac hasn’t just shoehorned a big engine under the hood and called it good. Unlike some brands that just slap a performance badge on a car with special trim or wheels, not only does the Escalade-V actually get a compelling engine, but it also gets a full complement of supporting modifications along with that powerplant.

This SUV gets the fourth generation of GM’s Magnetic Ride Control along with Air Ride Adaptive suspension and additional suspension hardware exclusive to the V model. In fact, even the rear air springs are built to be stiffer than those in the front which, again, should aid in the effort to put those 682 ponies to the pavement.

Cadillac also built in different drive modes that can be specifically applied to components like the steering or suspension including both Tour and Sport. There’s even a fairly practical ‘Snow/Ice’ mode that can be applied to the engine and AWD system.

Considering that this thing has more power than most sports cars on sale in America right now we’re kind of impressed that they restrained themselves enough to not put some sort of silly ‘Race’ or ‘Track’ setting in there. That’s just the tip of the technological iceberg though.

Technology And Luxury Come Together In The Escalade-V 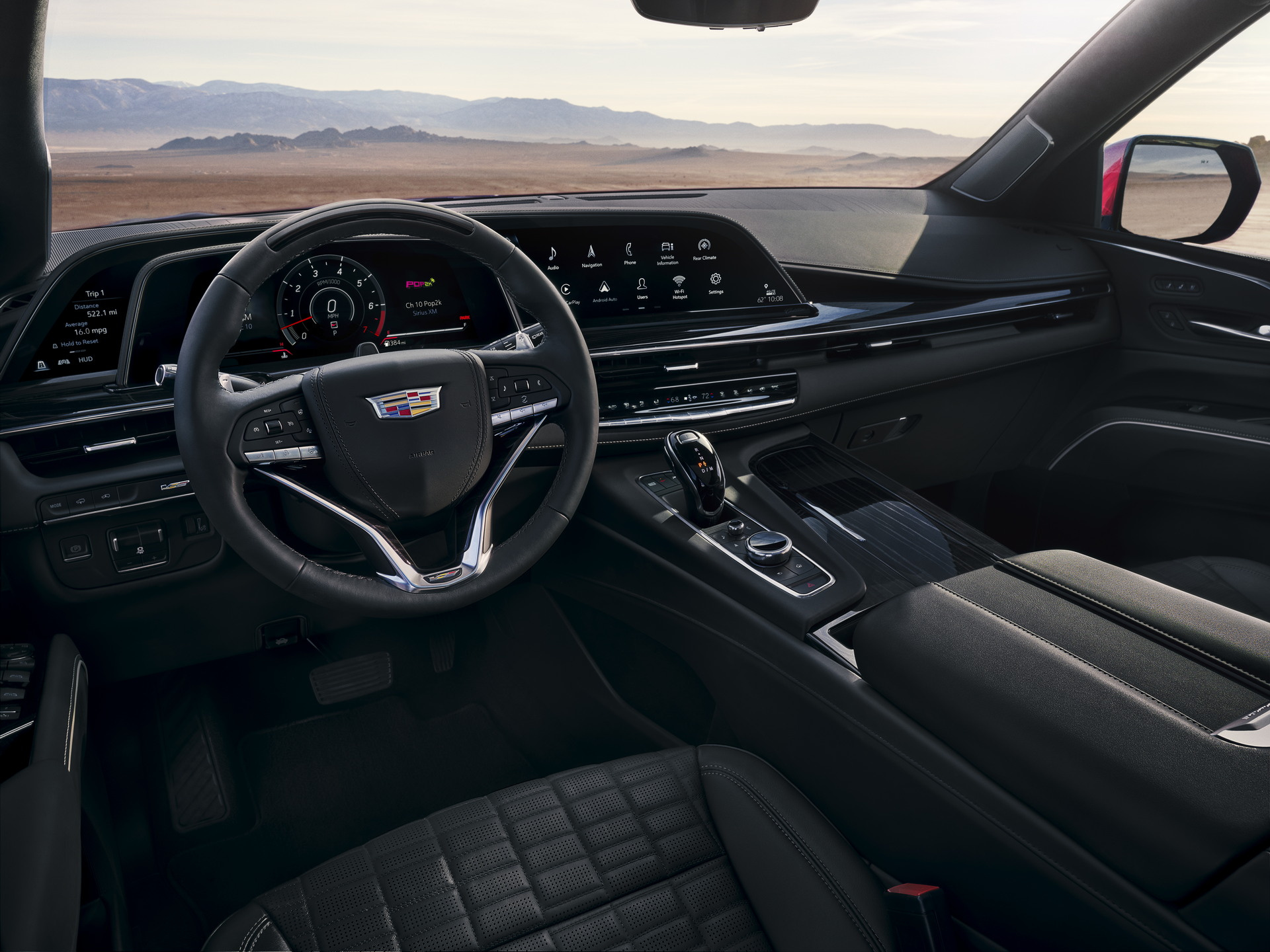 In today’s automotive marketplace, luxury and technology go hand in hand and without offering the latter, it’s hard for automakers to argue that the former exists at all. That’s one reason that the Escalade-V is packed full of modern and somewhat advanced technology.

GM’s Super Cruise hands-free technology will be an optional feature priced from around $2,500, and in our recent test of the GMC Sierra Denali Ultimate we really liked it.

Inside every Escalade-V model, buyers will find some 38 inches of total diagonal display with what Cadillac says is twice the pixel density of a 4K TV. Included in that 38-inch is a 14.2-inch center cluster display that leverages augmented reality to provide additional information when navigation is active.

Screens aren’t the only stunning thing to look at though because the Escalade-V will get either a Black, Dark Auburn or Zebra Wood accents. The front row seats get a massaging feature and all three rows have aniline leather upholstery.

Buyer’s ears will get just as much of a treat thanks to a standard AKG Studio Reference 36-speaker audio system with “3D surround, navigation rendering, and more.” When you see your first Cadillac Escalade-V running around just remember that inside it are more speakers than in most people’s homes. And don’t worry, you’ll know one when you see it.

The latest Escalade is a bold SUV but the V version stands out with revised styling around the entire exterior. On the front of the vehicle, the black Sport Mesh grille used on other V-models is present. In addition, slight nips and tucks make the front and rear look more athletic. At each corner, buyers will find unique 22-inch wheels as well as bespoke Brembo front brakes with Edge Red brake calipers and a signature quad-exhaust outlet.

The entire package of gigantic excessive luxury, power, and technology goes on sale in late summer. While Cadillac says that production will be limited we haven’t received word on exactly how many units will roll off of the line. Detailed pricing and options will be communicated at a later date.