A young man has revealed his shock at finding his married, ‘homophobic’ father on Grindr – years after the older man ‘disowned’ him for coming out as gay.

Speaking to Kyle and Jackie O the man known only as Jacob said he clicked on his dad’s headless profile one day when he was cruising the popular hook-up app.

He didn’t recognise his dad’s torso from the pictured but couldn’t shake the feeling there was something a little too familiar about it.

‘They have one of those ensuites that are through the walk-in closet – I thought that looks sort of like my parents house,’ he said.

‘I clicked through the profile to see if it could be my dad,’ he said.

The young man went on to explain that his parents seem as happy as ever, and have been together for 27 years.

‘I have never seen any signs of a rift between them,’ he said.

So he decided to engage with the profile, to see if it really was his dad, a fake profile or someone with an eerily similar home.

‘I wasn’t flirting with him, I just engaged in normal conversation, told him I liked his picture and asked where he is from,’ he said.

‘Then I asked for a picture of his face – when he sent it through it was my dad,’ he said.

Jacob is now torn over what he should do and says he feels for his mum.

‘I am very open and forward thinking, I don’t care if he is gay I just don’t want him lying to my mum,’ he said.

What should Jacob do?

‘So now I am torn, do I tell mum, do I confront my dad,’ he the dumbfounded radio hosts.

Jackie O said she would have ‘walked away’ after seeing the familiar bedroom in the background.

‘I want to hear his opinion and get his story,’ Jacob said.

‘I want to know why he has been hiding it from me for so long.’

He also added that his father stopped talking to him for years when he found out he was gay.

‘He was super against it when I was coming out – he hated me – he was super angry and didn’t want anything to do with me in his life,’ he said.

‘The older closeted men are often homophobic,’ he added.

Jacob said it took years for he and his father to get back on good terms.

He then asked for advice from the shows listeners who all agreed he needed to have a sit down chat with both of his parents.

‘You have to discuss this with both of your parents, they have to be aware,’ one man said.

‘My partner had a similar thing happen, his dad had six kids, was a construction manager and appeared happily married.

‘Your dad will be happier if he can be true to his real identity, and your mum deserves the chance to be happy too,’ he said.

Another said he should speak with his father first – before having a chat with his mum. 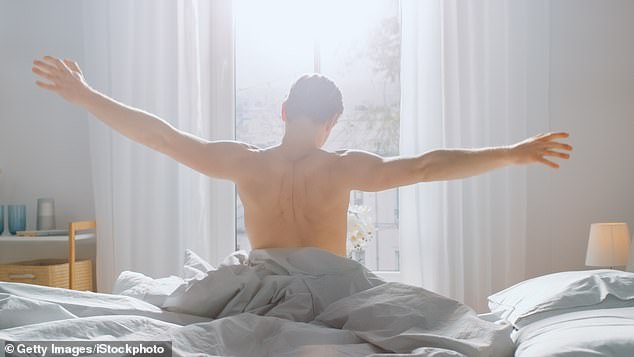 A third said his dad did the same thing – but has managed to repair the relationship with his wife while being honest about his sexual identity.

‘I found gay magazines in the back of his car and followed him after work where I found out what he was doing in the evening,’ he said.

‘I spoke to my siblings about it and we realised he had been doing it our whole lives.

‘My parents are still together, we had a sit down chat about it, after all we all need to be able to feel proud about who we are,’ he added.

Jacob was undecided by the end of the segment, but told Kyle he wouldn’t be calling his dad on-air about it.

Jacob also has a headless profile on the app, and says many men choose to keep their faces off the app.